The world’s premier aerospace laboratories and research organisations were represented in South Africa at the end of October when the CSIR hosted the eighth summit of the International Forum for Aviation Research (IFAR).

The summit took place from 23 to 25 October and 38 participants from 17 member countries were represented.

The world’s premier aerospace laboratories and research organisations were represented in South Africa at the end of October when the CSIR hosted the eighth summit of the International Forum for Aviation Research (IFAR).

The summit took place from 23 to 25 October and 38 participants from 17 member countries were represented.

IFAR represents a global network of 26 aviation research establishments from Africa, Asia, Australia, Europe, South and North America. Founded in 2010 and representing more than 35 000 researchers working in aviation around the world, it aims to strengthen networking and information exchange as well as bilateral/multilateral technical collaboration amongst members, addressing the world’s most pressing challenges in aviation. It is also the world’s only aviation research establishment network. Dr Kavendra Naidoo, CSIR aeronautic systems manager, is South Africa’s representative to IFAR and facilitated the hosting of the event.

The summit agenda included discussions on various opportunities and challenges in aviation, including the future of supersonic transport and new-generation aerospace materials. The delegates also deliberated on empowering early-career development in the aviation sector. The CSIR created an opportunity for the South African aerospace community to engage with these global thought leaders by hosting a panel discussion on “Empowering Aerospace Growth in Africa,” with panel members from the CSIR; TsAGI; ONERA; DLR; CAE; NASA as well as the IFAR founder.

The last day of the summit was used to introduce IFAR members to the CSIR aeronautics research facilitates and to South African aeronautical industry. The delegates visited the CSIR’s Aeroswift and wind tunnel facilities, as well as Denel Aeronautics, Aerosud and the South African National Space Agency in Gauteng.

The IFAR summit was held in the same week as the Aeronautical Conference of South Africa and the Avi Afrique summit. IFAR leaders supported the local event by delivering keynote addresses on future aerospace trends and drivers, the future of supersonic transport and air traffic management amongst other topics.

“On behalf of the entire IFAR community, I would like to express our sincere gratitude to Dr Thulani Dlamini and Dr Kavendra Naidoo as well as the wonderful CSIR team, led by Ms Nicole Tanith du Plooy, for hosting a highly successful 8th IFAR Summit. Thanks to the warm hospitality extended to all IFAR Summit participants during our memorable stay in Pretoria, I am confident that we can fondly look back to this Summit in the future as one where we had highly productive discussions and decisions that led to IFAR taking a great leap forward as an organization and community. We also came away impressed with the high levels of capabilities that CSIR and its industry partners possess in aeronautics research and technology, and enjoyed the fruitful discussions we were able to have with the industry leaders. I thank you for your continued support for IFAR, and look forward to working together to further enhancing IFAR's values for our members,” commented Dr Fumikazu Itoh, Vice President of JAXA, who served as the IFAR Chairperson for the past 2 years.

“The exchange and evolution of ideas between leaders of these organisations can change the future of aviation and aeronautics. In these few days, the IFAR summit enabled the exploration of several collaborative research opportunities. An event of this nature and stature also provides a unique opportunity for South Africa to access a powerful, global network of researchers and leaders of research, enhancing our ability to solve some of our deepest challenges,” concludes the CSIR’s Dr Kavendra Naidoo.

More information on IFAR is available at http://www.ifar.aero/. 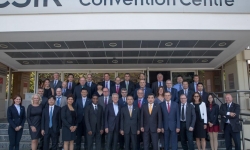