Naidoo’s research is centered on laser beam shaping for the generation of transverse higher-order modes in solid-state laser resonators.

Naidoo’s research is centered on laser beam shaping for the generation of transverse higher-order modes in solid-state laser resonators. Such lasers are of considerable interest in the industry, the military and academia, and have been exploited in applications such as remote sensing, ultrafast spectroscopy, laser precision materials processing and free-space communication applications.

His research has resulted in publications in nature photonics, optics, and light sciences and applications. Naidoo’s current research focus is aimed at further understanding light-matter interaction through laser beam shaping. He is exploring the shaping of laser light of medium (1 W – 100 W) to high power (100 W – 5 kW) systems via solid-state resonators, solid-state bulk amplifiers and external approaches with fibre lasers.

The shaped beams are to be used to study the dynamics of heat flow in the material and the changes in the crystallography under material melting. The objective of this work is to enhance laser-enabled manufacturing processes such as additive manufacturing, surface hardening and laser cutting.

Naidoo has received numerous awards and research grants for his work. He also sits on several international committees and holds an Honorary Research Fellowship at the University of the Witwatersrand. 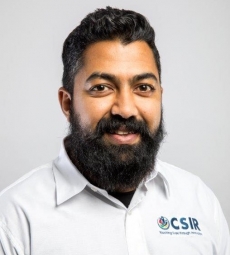