The Heavy Vehicle Simulator (HVS) is a large truck-type vehicle that can simulate the effects of 20 years’ worth of traffic and environmental stressors on road surfaces (pavements) in just three to six months. This informs design specifications for the building of new roads and the rehabilitation of existing roads, as well as the development of new road surface technologies that are cheaper, more resilient and more environmentally friendly.

Research on pavement wear using the HVS started in South Africa in the 1960s. Prior to this, South African road designers used data from testing done in Illinois in the USA to quantify the effects of heavily loaded vehicles on our roads. The CSIR realised that the conditions in Illinois were very different to those in South Africa, and so started to develop a South African testing facility. The local pavement design approach during the 1960s was to develop an analytical design procedure in which the engineering characteristics of pavement materials could be used together with mathematical modelling to predict or analyse pavement performance. Due to the high running costs from using normal trucks and the long periods of time needed before road failures were observed, the CSIR instead developed a vehicle for accelerated pavement testing (APT). This led to the first HVS, Mark I, which was built in 1967. The Mark I model was a stationary testing device and was used on the CSIR campus.

The fully mobile Mark II HVS was later built in 1970 to understand, for instance, the unforeseen increased road damage caused by heavy trucks carrying coal from Emalahleni to the East Rand. With the Mark II, the CSIR came to understand the causes of pavement damage much more comprehensively, leading to the development of the South African mechanistic pavement design method, which is still used internationally by pavement engineers today. The success of the Mark II led to the CSIR commissioning three more vehicles between 1976 and 1978 with an improved design, designated the Mark III.

The CSIR has also been involved in designing the HVS Mark IV, IV+, VI – customised HVSs which have been sold to various research groups and testing facilities around the world. All of these models have been produced and sold internationally by Dynatest Consulting under a licence agreement with the CSIR, and the CSIR APT research group provides training workshops and assistance to partners around the world as and when required.

Testing of pavements carried out by the CSIR using the HVS helps to reduce construction and lifecycle costs of roads and road infrastructure, reduce or limit early pavement failure, and optimise pavement design and maintenance.

The HVS is a large vehicle that subjects pavements to accelerated wear and tear, of the sort they would experience over 20 years, in a three to six-month time frame. The information gathered using the HVS provides engineers with information about weaknesses in pavement design, be it due to traffic, unusual loads or environmental conditions. The HVS can also be used to evaluate runways and landing strips for aircraft.

This information allows researchers to test new low-cost or advanced road construction materials quickly and effectively, as well as develop and improve on design and maintenance practices to limit costs of pavement design failure.

Over the last few decades, the ATP research group has partnered with an international company, Dynatest Consulting, to produce HVS vehicles for international markets; in addition, international collaboration has seen South African pavement testing practices, developed at the CSIR, have a major impact on pavement design and testing around the world.

The CSIR HVS programme boasts a return on investment of between R4 and R10 for every R1 invested in our national road network, making it a valuable contributor to the South African economy.

The HVS programme has also a noticeable effect on South African road design. Some highlights include: 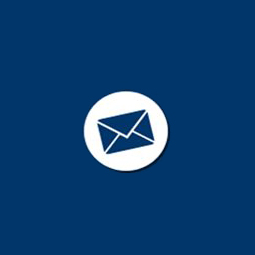 The HVS Mark III is 23 m long, 3.7 m wide and 4.2 m high. It can test roads using dual truck wheels, super single tyres or aircraft wheels with a loading range of between 20 and 210kN. Loading can be applied in one or both directions. Channelled traffic or wheel wander patterns can also be simulated.

The newest iteration, the ‘smarter’ Mark VI, costs 25% less than its predecessor, the Mark IV+. This HVS is controlled by wireless, on-board computer systems, which can also be controlled remotely. It also includes an optional beam extension that allows for a longer testing area (14 m instead of 8 m in the case of the Mark IV) and increased loading speeds of up to 20km/h. This HVS is modular and can be transported on normal highways without special overloading permits.

In addition to the MarkVI, two extraordinary size HVS models (HVS MarkVI-A) have been developed and sold to particularly evaluate aircraft loads on runways and taxiways. The latest model was sold to the Federal Aviation Administration in Atlantic City, New Jersey, USA. This unit is the largest HVS to date with a total length of 36.9 m and can apply wheel loads of up to 450KN.

Accelerated road testing
Without a machine like the HVS, road engineers would have to rely on either costly, long-term observations of road performance over 20 years, or on much less accurate laboratory testing (pushing, pulling, crushing squeezing, vibrating) of small samples, and computer-generated models. HVS bridges this information gap by accelerating the physical testing of full scale roads from 20 years to just 3 to 6 months. It provides a realistic estimate of true road performance in a much shorter time, which is key for testing new road technologies amid rapid urban development and a changing a climate. 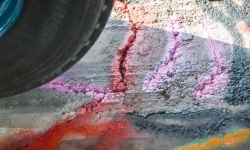 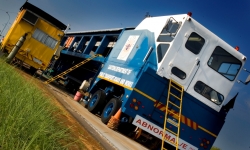 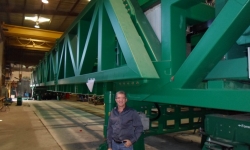 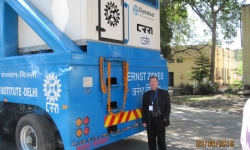