Researchers in South Africa and their counterparts in Argentina are studying the links between human-induced pollution, the interaction of river streams and landscapes, and specific groups of organisms in sandy rivers.

The research will fill the gap of knowledge pertaining to sandy bedforms like bars and dunes and their relationship to macroinvertebrates and human-induced pollution in both countries. Specifically, a macroinvertebrate index will be compiled for sandy bottom rivers, based on the information gained from the two rivers.

The Berg River
The Berg River catchment covers an area of almost 9 000 km2 in the Western Cape Province. The river runs in a northern direction for some 285 km and a big part of the catchment is relatively flat. Ultimately, the Berg River discharges into the Atlantic Ocean. The main source of pollution in the Berg River comes from informal settlements located in close proximity to the river and from raw sewage originating from sewage treatment works that often end up in the river. Due to the fact that the upper and middle river catchments support intensive agricultural activities, which in turn also have the potential to cause pollution, the ecological integrity of this river is of extreme importance.

The Paraná River
Argentina’s middle Paraná River is the sixth longest river in the world. It is surrounded by agricultural activities as well as densely populated urban areas. The study area is in a floodplain area and as such, is a massive suptropical wetland system, explains Arno de Klerk, CSIR aquatic scientist. The Paraná River has a drainage area of more than 2.5 million km2 and has an average discharge of approximately 17 000 m3 water per second. Understanding the hydrology of the middle Paraná floodplain system, especially flood pulses, is crucial.

Although the two river systems differ dramatically in terms of size, the ecosystem processes occurring within these systems are similar, albeit at different scales. The results of the analyses from the samples collected in the middle Paraná River will be of great value to the Argentinians in informing assumptions made about pollutant levels in the river. This project will provide information from different environments and at different scales, which will aid in predicting the impact of pollutants in sandy rivers.

The results of the first leg of the study have already helped water resource managers in the Western Cape Province to improve their monitoring programme by incorporating the developed tools into their monitoring exercises. 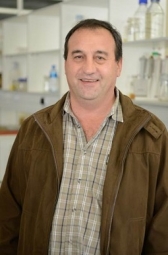 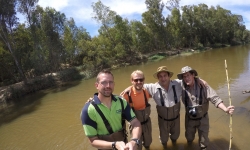