The CSIR has developed a software product that converts digital text into synthetic speech, in all the 11 official South African languages.

The CSIR has developed a software product that converts digital text into synthetic speech, in all the 11 official South African languages.

Up until the development and commercialisation of the CSIR’s Qfrency Text-to-Speech (TTS) product there had been no other text-to-speech product in the market that could deliver synthetic voices in all 11 official South African languages. Ten of South Africa’s official languages have been classified as resource-scarce, where resources in this context refers to digital language resources (text as well as speech) and research resources (research into linguistics). CSIR researchers have, in the past 18 years, developed capabilities to work with resource-scarce languages and adapt state-of-the-art techniques in text-to-speech, for the South African context.

The CSIR’s Qfrency TTS technology overcomes the language barrier for users in government or business looking to reach a wider audience. The technology generates synthetic speech that is as close to human speech as possible, including articulation and accent. “We have progressed with our research and development of deep neural network (DNN) voices to the point that this technology presents a major leap in the naturalness of the synthetic voices that employ these DNN techniques. The next step in the Qfrency TTS development is to port this research and development into our commercial offering, thereby giving our customers access to the latest advances in this technology,” says CSIR senior engineer Aby Louw.

The current focus of commercialisation efforts is the business-to-business sector, focusing on large-volume users such as call centres in telecommunications companies, adding speech channels to chat bots employed for self-service applications by large corporations and adding a speech modality to online learning platforms. 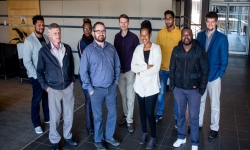