Ray is a chief researcher and manager at the Council for Scientific and Industrial Research (CSIR)’s Centre for Nanostructures and Advanced Materials at the Department of Science and Innovation-CSIR Nanotechnology Innovation Centre. He leads one of the CSIR’s most productive research groups, working on new materials for smart packaging, energy, sensors, carbon dioxide conversion, water purification, drug delivery, cosmetics, manufacturing and even wound healing.

According to figures collected by prominent website, research.com, in December 2021, Ray’s 615 research articles had been cited 34 509 times by scientists from over 180 different countries. This is a measure of his output and performance as a scholar, and the website ranks him as South Africa’s number two researcher in materials science.

“My name is ranked, yes, but it is really a team achievement as a research centre, as the CSIR and as a country,” he says.

“For our group, this kind of recognition means we are making an impact in the science community. It means we are doing something relevant for the world, and that really boosts our motivation. It also means that funders can see how well our researchers are doing.”

He says that the ranking reflects the hard work of the centre’s junior and senior experts in fields as diverse as modelling, chemistry, biochemistry, engineering and physics.

“We have the most diverse team, which we have built from the bottom up,” he says. “For example, we can draw on computer modelling and medical knowledge when it comes to wound healing materials, because we can predict how a material might interact with human skin, and we can predict side effects like swelling or secondary infection.”

He says his multidisciplinary team is also making an incredible impact on sustainable agriculture and environmentally friendly chemicals, first by developing new ‘green’ materials, and then by transferring those technologies to industry.

“We are serving seven different industries right now,” says Ray. For instance, the team is working with Sappi on biomass conversion, which means finding value-added uses for the plant waste created during their paper-making process. The team is also working with Engen on processing optimisation for environmentally benign polymers, and has provided medical nanotechnologies to 3Sixty Health.

“We have been setting up our centre for the last decade, and now we are moving fast. In the next decade, we will do more and more.”

He says that one of the most important ways to keep the team moving so fast is to develop their management skills. “You can be a good scientist but if you don’t know how to manage a project you won’t make an impact.”

To him, being rated South Africa’s second-highest materials scientist is simply a steppingstone to bigger things. “We want to be even more relevant to society and industry. We want to see, in four to five years, that we are top in the country and in Africa. We are doing something good here, so we would like to be number one in relevance and cutting-edge science.”

“For any new materials that we are trying to develop, we now ask ourselves what the fate of that material will be,” he says. For instance, his team is working on smart packaging made from plant-based polymer nanocomposites, which can be discarded to biodegrade without harming the environment.

Ray says that they are now also using data science to streamline the research process. “Say for instance we want to develop a new plastic material, there are thousands of research papers already available on plastic materials known as polypropylene composites. Before wasting time and money testing new plastics blindly, we can first gather all this available data and use artificial intelligence (AI) to predict how new materials will work, so that we can select only the best candidates to test,” he explains.

He says that this all comes neatly full circle because the very AI that he uses relies on nanotechnologies and materials developed by top scientists like him.

The demand for such materials is already booming globally, and Ray and his team are now in a comfortable sprint to meet that need. “You cannot invent if you are not moving fast. If you are even a little bit slow, you will be out of the race.”

Issued by the Council for Scientific and Industrial Research

The Council for Scientific and Industrial Research, commonly known as the CSIR, is a world-class African research and development organisation established through an Act of Parliament in 1945. The CSIR undertakes directed, multidisciplinary research and technological innovation that contributes to the improved quality of life of South Africans. For more information, visit www.csir.co.za 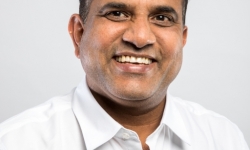