The passing of Professor Bob Scholes shocked not only South Africa, but also the world and, as such, tributes continue to pour in from across the globe. Colleagues and friends who have crossed various and dynamic paths with the late Scholes at the Council for Scientific and Industrial Research (CSIR) saluted him and described him as a gentle, caring, sensitive, intuitive, perceptive and passionate giant. Scholes was an alumni of the CSIR and we were looking forward to working with him on the CSIR alumni program.

The passing of Professor Bob Scholes shocked not only South Africa, but also the world and, as such, tributes continue to pour in from across the globe. Colleagues and friends who have crossed various and dynamic paths with the late Scholes at the Council for Scientific and Industrial Research (CSIR) saluted him and described him as a gentle, caring, sensitive, intuitive, perceptive and passionate giant. Scholes was an alumni of the CSIR and we were looking forward to working with him on the CSIR alumni program.

While we are now all much poorer, Scholes has left an indelible mark and set a high bar for those who were fortunate enough to have known and interacted with him. He was an extraordinary scientist, someone with a profound intellect, a remarkably wide knowledge of ecology and the natural world, and an ability and willingness to communicate this understanding clearly to his colleagues, students and the general public.

Scholes spent a large part, probably the most influential, of his amazing career at the CSIR, where he worked from 1992 until 2014, before joining Wits University. He made a massive impact on his colleagues during his time working as a research group leader in the field of terrestrial ecology and global change science.

Despite his international standing and the demands on his time, Scholes’ interests remained firmly rooted in South Africa. Here, he shaped environmental research at the CSIR for two decades, and led several high-profile international research programmes such as SAFARI 2000, and assessments that addressed local issues, including the Assessment of Elephant Management (2008) and the Strategic Assessment of Shale Gas Development in the Karoo (2016).

His popular books, The Kruger National Park: wonders of a South African Eden (published by Struik in 1995) and Climate change: Briefings from Southern Africa (published by Wits University Press in 2015), respectively, reflect his passion for the conservation of African savannas and his desire to communicate critical scientific findings to a broader audience.

Here at home, Scholes was described as an intellectual giant and a humble servant of the people. Colleagues who work very close to him said Scholes would summarise a day’s incoherent strategic planning session into three or four key points and actions in a way that everyone understood. In the natural resources space in the CSIR, he was a giant in terms of guiding strategy and, as a visionary Research Fellow, his contribution to the CSIR’s footprint in global change, systems ecology and biodiversity research is immeasurable.

In 2009, Scholes took up the opportunity offered by the CSIR to join the newly formed Southern Ocean Carbon - Climate Observatory programme and went to Antarctica on the SA Agulhas to run the brand new pCO2 observations. Being Scholes, he immersed himself in all aspects of the Southern Ocean and Antarctica.

Perhaps, the most wonderful legacy he left was the knowledge he imparted to the very young group of students under Sandy Thomalla, who was chief scientist of the voyage, and through his weekly published letters to his son, Stirling.

In January 2015, he left the CSIR to take up a Distinguished Professorship at Wits University, where he continued his work, with a focus on developing capacity in the field. He recognised that it takes many years to develop a systems ecologist, and strived to advance this pipeline at Wits through the growth of a research group of Master’s and Doctoral students, and Postdoctoral Fellows.

As part of Scholes’ contribution to the personal and professional growth of everyone who was privileged to work with him, he shared some gems.

Scholes would spent many evenings freezing on the Agulhas aft end, operating the Underway Conductivity-Temperature-Depth (uCTD) instrument. For a terrestrial scientist, he really made a seamless transition to sea life. Academics seemed not to have blunted his practical edge as, besides his involvement in the scientific activities, he tweaked and fine-tuned the pCO2 system throughout the voyage. He was a genuinely affable and likeable person, willing to share his extraordinary depth and breadth of knowledge.

As an environmental scientist, Scholes would engage with various researchers, especially students. On board, there would be moments of stress and frustration, but Scholes was always calm and compassionate, providing comfort and support whenever it was needed. He played a fatherly role to the team of students and young scientists, but was equally giddy with excitement at the adventure that they were all on!

The scientific community has indeed lost a giant and champion of environmental science. The CSIR salutes Scholes for his immense contribution to climate change research.

Scholes is survived by his wife, Prof. Mary Scholes, a Professor at the Wits School of Animal, Plant and Environmental Sciences, and his son, Stirling.

May his soul continue to rest in peace! 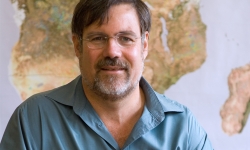