Ground-based surveillance and classification radar, a proposed technological upgrade to a forerunner that has had well-documented successes in curbing rhino poaching incidents through wide-area surveillance, was deployed in the Kruger National Park.

Despite unforgiving weather conditions at the deployment site, the system successfully detected and characterised (identified as humans or animals) targets at ranges of up to 10 km.

The CSIR-developed ground-based surveillance and classification radar was developed primarily through funding from the Department of Science and Innovation over the last three years, but benefitted from several leading-edge technologies that have evolved across multiple CSIR radar research and development projects.

The system has the same benefits traditionally associated with utilising radar for detection, namely coverage over very long ranges and for all-weather, day/night operation.

As an added benefit, the CSIR-designed and built electronically steered antenna technology reduces the minimum detectable velocity of targets. This means that it is especially effective in exposing slow-moving poachers trying to evade the traditional methods of detection employed by both their prey and park ranger guardians.

The use of innovative machine-learning-based target classification allows automatic and real-time designation of observed objects as either human, animal or vehicle.

This brings the system closer to the development team’s ultimate goal: a fully autonomous surveillance system that may be deployed to help protect wide swathes of the country’s valuable natural resources. 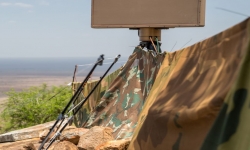