The CSIR has developed a robust system to rapidly detect deformation of land surfaces. This is particularly useful in mined areas, where early detection of deformation is pivotal.

In South Africa, large areas are affected by surface deformation associated with underground mining or natural geological processes. The consequences of surface deformation events are frequently severe in terms of damage to infrastructure and the environment while posing a severe threat to the health and safety of humans. The appropriate response to a hazardous event depends on the ability to understand the nature of the hazard. Ideally, early-warning indicators should be available through the use of appropriate technology. Also, proving the stability of undermined areas is important for post-mining rehabilitation.

The CSIR developed Azimuth, a large-area surface deformation monitoring system that uses data captured by earth-orbiting synthetic aperture radar satellites. These sensors measure the phase (time delay) and amplitude of microwave signals returned from the Earth’s surface. The Azimuth system provides a comprehensive overview of deformation detected over large areas of up to 150 km by 150 km. The deformation measurements are provided on a web-accessible platform.

The system has already been used to detect the formation of a sinkhole in Centurion. The sinkhole was discovered when scientists processed historical satellite imagery over the greater Tshwane area. An analysis revealed that surface subsidence was taking place at an unpopulated site in Centurion. The subsidence was detected with a total of 6.6cm of deformation recorded between June and August 2015. The deformation features were about 100m in diameter. Scientists visited the property where the subsidence was taking place and found that a sinkhole had indeed been formed.

Azimuth follows on another locally developed Earth observation monitoring and decision-making system, the Advanced Fire Information System (AFIS). The system was developed to help reduce the damage caused by wildfires. Using satellite data, AFIS detects fires in real-time and issues automatic warnings to the cell phones or tablets of users, such as farmers, conservationists and those managing electricity transmission lines. The system provides information across the full fire management value chain, from forecasting and predictions to active fire monitoring, post-event burn assessment and mapping. The CSIR has seen global uptake of both these CSIR-developed technologies. 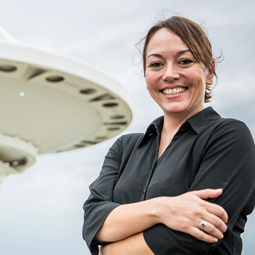