The CSIR has developed an electronic warfare pod that can be hosted on a number of fast jet types to provide a dynamic, multi-angle and more agile means of testing the effectiveness of radar and electronic warfare applications than the traditional ground-based systems. In the most recent tests, the pod, which serves as a mobile test laboratory, has proven its compatibility with the Hawk aircraft.

The pod is the result of a multiyear development programme between aeronautics experts and their counterparts in the fields of radar and electronic warfare at the CSIR, as well as a set of commercial partners from industry,

The pod is similar in look, size and mass to a commonly used external store on fast jet types, such as the BAE Hawk, Alpha Jet, Hawker Hunter, F-16, Tornado, F-4 Phantom and the Mirage III – all able to carry the system without costly reconfigurations or integration and clearance. It is a faster and less costly platform with which to test new airborne payloads. Its programmable capability means it can be used to test a range of radar or electronic warfare threats. It is also an effective and safe way to train operators.

The pod has proven its compatibility with and safe operation on the Hawker Hunter, the Cheetah and the Hawk aircraft – the latter being a platform operated by the South African Air Force.

In the test phases, the functionality of the pod’s various systems, including its electronic warfare payload, was tested rigorously in various operational flight profiles, including simulating anti-ship missile engagements at high speeds and very low altitudes. Stringent environmental testing was also done. By 2015, the first flight trials were performed to evaluate the effect on aircraft handling, performance and robustness of the pod structure and reactions in its internal environment.

The pod was designed and has been tested to operate using a CSIR-designed ram air turbine to avoid it drawing on the power supply of the host aircraft. The ram air turbine is a small, electrical device that generates power by utilising the airstream of the aircraft in flight. This is an alternative to a battery-based powerpod – similar in size – that would also need to be installed on the jet.

While the main use of the pod is to evaluate the effectiveness of electronic warfare and radar interventions, it also allows engineers to experiment with different approaches and is an ideal platform for the training of young electronic engineers, as well as radar and electronic warfare operators. 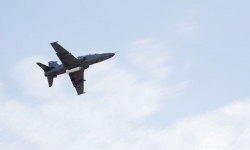 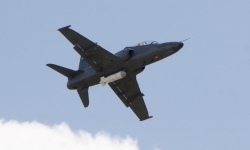