Encapsulation of sensitive actives for human and animal health

The CSIR has developed solvent-free ‘green’ encapsulation technologies for sensitive actives used in animal and human health such as probiotics, proteins, vaccines, drugs, vitamins and bioactive plant extracts to enhance their shelf-life stability and/or bioavailability.

The encapsulation of actives is generally done to improve their stability during storage and/or consumption, for delivering the active at a targeted site such as the stomach or intestines, or to obtain a specific release profile, such as rapid release, slow release or delayed release and/or to improve the solubility of the active. Conventional encapsulation methods expose active ingredients to organic solvents and high-process temperatures, which can have a detrimental effect on their viability, specifically for sensitive actives such as proteins, bacteria and vitamins.

The CSIR’s scCO2 encapsulation technologies are based on polymer complexation. Researchers have designed these complexation technologies to be pH-responsive, resulting in the active ingredients being protected in acidic environments, but released in alkaline environments, such as the intestinal fluid. In addition, the ‘close-knit’ structure resulting from the complex provides a barrier to oxygen and moisture.  With this technology, the CSIR has demonstrated improved shelf-life stability of probiotics, as well as improved survival through the gastro-intestinal track.

The combination of the ‘soft’ processing conditions offered by scCO2 and the unique properties of the polymer complexes have been shown to improve the overall stability, survival and/or bioavailability of bacteria (probiotics) and bioactive plant extracts, such as flavonoids and polyphenols.

The abovementioned technologies can be extended to improve the stability and bioavailability of other sensitive actives such as vitamins, enzymes and vaccines. 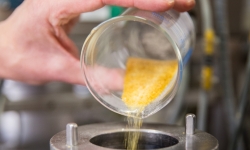 Encapsulation
Encapsulation is a process used to entrap active agents within a carrier material, providing protection from detrimental external influences such as temperature, light, oxygen or moisture. The carrier material can release its contents via dissolution, degradation or swelling allowing control of the release profile of the active ingredient.