Heavy Vehicle Simulator: An idea adopted around the world

The heavy vehicle simulator (HVS) is a CSIR-developed testing facility for roads. It is a success story with global impact and one that has had a major impact on the design, construction and maintenance of roads locally and abroad for more than 40 years. Roads are the lifeblood of an economy; at a cost of between R8 million and R15 million for a kilometre of highway with a relatively short lifespan of 20 to 40 years, a country’s roads infrastructure has to be scientifically constructed and maintained to maximise cost-effectiveness.

The HVS is a high-tech accelerated road-testing field lab with unique instruments that measure and analyse the engineering performance of road structures and material layers to test whether a specific road will have an acceptable lifespan. These results are invaluable in taking corrective action in road design and selecting the best construction materials and methods when planning the construction of long stretches of new roads.

The CSIR-developed HVS has been used locally to test ultra-thin concrete technology for application in high-volume roads in South Africa. This followed a research project initiated by The South African National Roads Agency Limited (SANRAL) with the CSIR, the University of Pretoria and the Cement and Concrete Institute. The original road design was imported from Denmark and adapted for local conditions. According to the CSIR’s Louw du Plessis, an international expert in accelerated pavement (road) testing, “the ultra-thin, high performance concrete is heavily reinforced – up to seven times more steel is used than ordinary continuously reinforced concrete. Although the thickness of the concrete is only between 50 and 75mm, it has very high compressive and bending strengths, which makes it suitable for heavy loads on high volume roads.”

Some examples of the successful implementation of the technology include a section of the N12 near the Gillooly’s Interchange in Gauteng and on the N1 between the Klip River Toll Plaza and the Huguenot Tunnel.

The HVS technology platform was licensed to Dynatest, a private company in the USA. Dynatest markets and manufactures the machines and also maintains the 18 machines already in operation. The CSIR receives a royalty for HVS sales from Dynatest. 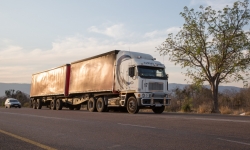 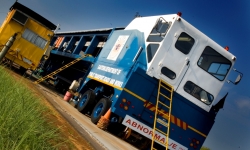 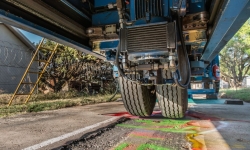 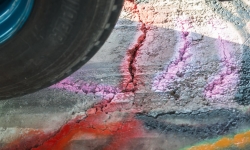