CSIR researchers have developed vehicle condition monitoring systems for the rail and bus transport industry that collect and analyse vehicle, driver and passenger data to optimise the operation of buses and locomotives.

A healthy transport system for people and goods in South Africa is the backbone of social and economic development. Vehicles such as trains and buses need to operate reliably and cost-effectively. They also need preventative maintenance to avoid costly breakdowns.

The CSIR is working on prototype condition monitoring systems designed for Busmark’s fleet of buses and Transnet’s locomotives. These systems collect data from on-board sensors, cameras, engine control units, computers and networks and also provide information such as global positioning data. This is communicated to drivers, supervisors and fleet operators. The data are transmitted to a central server and analysed with computer algorithms to detect journey and vehicle anomalies but also negative trends in sensor data. The system can determine the location of the vehicle at any part of the journey; detect driver and commuter behaviour, capture incidents and monitor fuel consumption, emissions and even re-route in case of obstructions.

All of this data are generated and analysed in real time and the system can generate early warnings, for example when there are signs of potential engine failure. The focus is to do preventative maintenance and to keep the fleet available while reducing total operational cost.

The technology can be tailored for any vehicle application, including driverless vehicles and for vehicles in mining. It houses sufficient intelligence to eradicate the need for additional computers, thereby limiting third-party involvement in manufacturing and operations. It also creates local expertise, jobs and faster turnaround times in maintenance and repairs. 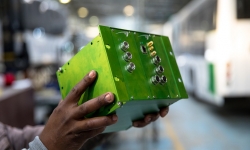