With over 50 years’ experience, the CSIR’s wind tunnel infrastructure plays a pivotal role in aeronautical development in South Africa.

With over 50 years’ experience, the CSIR’s wind tunnel infrastructure plays a pivotal role in aeronautical development in South Africa.

The development of flight vehicles requires significant investment and poses a huge burden on the developer to get things right the first time. The purpose of a wind tunnel is to simulate the flow environment encountered by an aircraft, or any other body, during flight. A wind tunnel generates wind or air flow over a static airframe supported in a controlled test environment. Instrumentation in or on the supported test item providesa data measuring the aerodynamic behaviour of the airframe at various flow speeds and attitudes.

The low-speed wind tunnel is a multipurpose subsonic wind tunnel with a maximum speed of 120 mps or around 430 kmh. It has a test section 2.1 m wide by 1.5 m high, allowing it to accommodate a diverse range of models. The models can be supported on very precise balances to measure their aerodynamic forces and moments in the airflow.

A wide range of other tests are also performed in this wind tunnel, such as pressure measurements, flow visualisation, propeller effects/propulsion integration and aeroelasticity (flutter) tests. These tests provide the experimental ‘truth’ that is vital for engineers to check and expand on in analytical models.

The wind tunnel is used for a wide range of commercial tests on aircraft, unmanned aircraft, drones, wind turbines, structures in wind loading (such as tall buildings and towers) and vehicles.  For vehicle testing, the wind tunnel has a unique test section equipped with a rolling floor that correctly represents the flow-field around cars or trucks moving relative to the road.

“This national facility is key to South Africa’s ambitions of developing its industrial sector and making it more competitive in today’s globalised world. To achieve this goal, products developed by the local industry that function in airflow must be designed well and tested properly to ensure that the specified performance is delivered to the market,” says CSIR principal engineer Kevin Jamison. 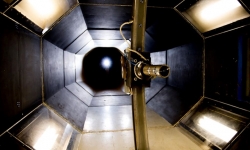