The CSIR together with the Medical Research Council, have developed and tested a low-cost Doppler ultrasound device that aims to place Doppler technology at the primary healthcare level. The technology can potentially reduce referrals for small-for-gestational-age fetuses to secondary healthcare and safely detect fetuses at risk of stillbirth.

According to Statistics South Africa, in 2013, there were 22 116 perinatal deaths. Two-thirds of these were still births. The South African Medical Research Council’s ninth Saving Babies Report (2012 - 2013) found that the top causes of perinatal deaths in the state health sector included unexplained stillbirth and spontaneous preterm birth. The report stated that some of the top avoidable causes of baby deaths are delays in referring patients for specialist care and fetal distress not being detected by fetal monitoring.

The specialist obstetric care required for fetal monitoring of high-risk pregnancies is a scarce resource in the public health care sector. The challenge is to improve access to this level of care for those women who really need it, while reducing unnecessary patient referrals.

Fetal size is used as a simple metric to assess the health of a fetus during pregnancy and concerns are raised whenever a fetus is smaller than expected.

Fetal growth restriction is normally detected by using a tape measure to measure the distance across the mother’s abdomen, called the symphysis-fundal height. When growth restriction is suspected, a clinic-based nurse must refer the pregnant woman to a higher level of care, where a conventional Doppler ultrasound test can be done using an expensive imaging device to establish if the smaller-than-expected fetus is healthy or sick. The use of the tape measure provides a mere estimate, which may lead to many unnecessary referrals in cases where small fetuses are healthy.

CSIR researchers have developed and tested an ultrasound device, called Umbiflow, which can be used in clinics before deciding about such a referral. A trained nurse can use the device to measure the blood flow in the umbilical cord, detecting if the placenta is no longer providing sufficient nutrients and oxygen for a fetus to reach its growth potential.

An earlier field trial conducted in Kraaifontein in the Western Cape, showed that referrals of patients with suspected fetal growth restriction can be reduced by 55% if the Umbiflow technology is made available at the primary care level. Conducting Umbiflow measurement at a clinic was shown to be more cost-effective than referral to a secondary hospital for a Doppler test.

In the latest clinical study in Tshwane district, 1 017 women have been screened so far and the abnormal test rate was around 10%. Umbiflow detected absent end-diastolic blood flow in the umbilical cords of these fetuses, an indicator that they were at very high risk for stillbirth. Umbiflow is proving to be an effective technological bridging device capable of detecting fetuses at risk of death. The perinatal mortality rate for women who had access to Umbiflow testing was 11.3 per 1 000 deliveries, and among those who did not use Umbiflow the mortality rate was 20 per 1 000 deliveries for the first six months of the study. 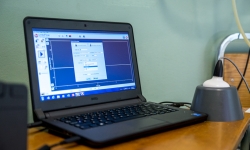 Ultrasound
Ultrasound is a type of imaging that uses high-frequency sound waves to look at organs and structures inside the body, and during pregnancy, at the fetus.