The electricity generated by the solar photovoltaic (PV) plants installed at the CSIR Pretoria campus has reduced the CSIR’s electricity bill by over R14 million since 2015.

The electricity generated by the solar photovoltaic (PV) plants installed at the CSIR Pretoria campus has reduced the CSIR’s electricity bill by over R14 million since 2015.

The CSIR Energy Research Centre began investing in renewable energy with the installation of solar PV systems at the start of 2015. The CSIR commissioned the solar PV system to provide a demonstration facility, leading the way towards a sustainable energy future; provide a cost saving in the form of reduced monthly electric bills; and provide a research platform to test and validate locally manufactured and assembled products in a real-world environment. The PV plants are commercially designed and built to meet a 25-year lifespan, providing a steady stream of electricity during daylight hours at costs below the prevailing tariffs, which leads to a positive net present value on the investments made in the facility.

In addition to the reduction in electricity cost, the PV plants have also aided industry collaboration. The plants attracted the attention of numerous companies that wanted to understand how the system works and what the comparative benefits were. These visits have resulted in collaborations between companies in the PV industry and the CSIR.

Companies and organisations that are interested in collaborating with the CSIR on solar photovoltaics, can contact the CSIR. 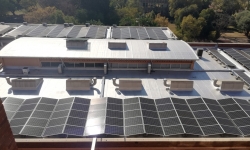