The CSIR has developed a new camera-based imaging and alerting system that provides wide-area surveillance and intrusion detection. The Smart Physical Security System draws on numerous technologies, from sensor technology to artificial intelligence.

The Smart Physical Security System (SPYSS) has been piloted at a Department of Correctional Services (DCS) facility in the Eastern Cape. The facility had been experiencing robberies at their chicken farming area, with farm-stock being stolen regularly. Dr Gugulethu Mabuza-Hocquet, CSIR research group leader for surveillance and counter measure systems says, “The DCS needed an intervention that would improve security at various facilities, starting with this particular one.” The two parties signed a Memorandum of Understanding to guide their collaboration.

The new security system was developed and deployed at the facility to detect intrusions and strengthen physical security. A computer vision application aids the situational awareness of guards throughout the day, thus improving their confidence and morale.

Drawing on complementary CSIR command and control technology, the system detects and sends alerts about intrusions at the monitored area. The platform is able send alerts to mobile phones within two to five seconds. “Recorded events can be used as evidence to study intrusion patterns to lessen incidents in future,” Kunene adds.

The deployment of the system has helped to not only protect the chicken farm area, but also guide the specification development process for a permanent solution through research and development experiments with artificial intelligence techniques for object recognition at the site.

“In addition to the detection and early warning capabilities of the SPYSS, we plan to expand the system to perform human recognition, vehicle number plate recognition and face recognition to offer a holistic security intervention at DCS facilities,” says Dr Mabuza-Hocquet. 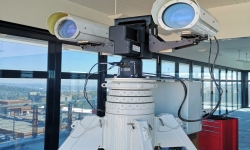 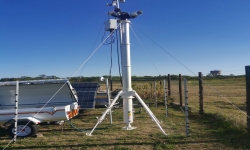 Smart surveillance
The CSIR has developed a new camera-based imaging and alerting system that provides wide-area surveillance and intrusion detection.