The CSIR works in the field of sustainable agriculture both directly and indirectly, focusing on direct applications (such as water use in crops), as well as the broader context (for example, climate change).  In addition, the CSIR focuses on the area of decision support and policy-relevant science, such as aligning agriculture with green economic growth and sustainable development goals and   improved management of agricultural landscapes working nationally and on the continent more broadly. The CSIR also works on agriculture-based post-mining land uses.

Agriculture in South Africa has undergone a number of changes, including changes in land tenure and production intensity. In a number of agricultural industries, increased productivity and intensification has occurred. In addition, new agribusinesses are on the rise, including those linked to the biodiversity economy, such as niche agriculture around crops such as rooibos, and wildlife management (a growing portion of the livestock production sector).

The agricultural sector faces a range of challenges, including challenges around the water-food-energy nexus, competition for water, and climate change. In addition, policies aimed at better supporting the agricultural sector need to be informed by the latest science, to ensure the interventions (including those undertaken by the private sector) are well targeted – both currently and under future evolving conditions. Work undertaken at the CSIR has played a critical role in this regard, and is increasingly sought after to better inform decisions and practice.

The CSIR is increasingly exploring partnerships with commercial agribusiness to ensure that science may be better understood and applied to inform better practice around sustainable agriculture. 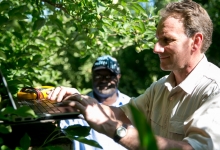 A green economy project design and implementation framework for agriculture