CSIR researchers in polymers and composites are making strides in the development of bioplastics that will be 100% biodegradable and suitable for recycling. This technology will contribute to the reduction of environmental pollution and could boost local job creation in manufacturing.

CSIR researchers in polymers and composites are making strides in the development of bioplastics that will be 100% biodegradable and suitable for recycling. This technology will contribute to the reduction of environmental pollution and could boost local job creation in manufacturing.

“In South Africa, about 90% of carrier bags, agricultural films and other short-term or single-use consumer plastic items are produced from petroleum-based chemical materials and are therefore non-biodegradable when disposed in natural environments,” says Dr Sudhakar Muniyasamy, a senior materials scientist at the CSIR.

“Most of these plastics are cheap to produce, but persist in landfills for many decades, causing environmental damage that is very expensive to clean.”

In 2014, Plastics SA, which represents the entire South African plastics industry, set itself the target of eliminating all plastic from the country’s landfill sites by the year 2030. There is also a global drive towards the development of biomaterials from renewable resources. According to the European Bioplastics Association, bioplastics still represent less than one percent of about 300 million tons of plastics produced annually. In 2014, the global production capacity amounted to around 1.7 million tons, but it expects the production capacity to almost quadruple to 7.8 million tons by 2019.

There are some significant challenges that need to be addressed, says Muniyasamy.

“Biodegradable plastic technology is an emerging technology and not well established compared to the annual 300 million tons-production capacity of petroleum-based plastics. Moreover, the production cost of bioplastics is currently three to five times more expensive than petroleum plastics because of their intermediate steps for biomass processing. Currently, researchers are working on a way to simplify the bioplastic production process. As production capacity increases, these prices may decrease,” says Muniyasamy.

Muniyasamy and his research team have succeeded in developing a 100% biodegradable and non-toxic plastic formulation from biopolymers and agricultural by-products such as starch, cellulose and glycerol, which could be used for packaging and is suitable for recycling.

The researchers have found that the formulation has good mechanical properties, similar to conventional plastics, and that it is suitable for conventional processing for moulds and film. Its most likely applications include biodegradable flexible packaging products (carrier bags, garbage bags and mulch films) and bioplastic, durable, rigid packaging products (fruit crates).

“The next step is to upscale the bioplastic formulation process and bioplastic film production to industrial manufacturing requirements to produce biodegradable carrier bags of up to 35 – 100 micron thickness for certification of environmental claims for us to approach the bio-based products market,” says Muniyasamy.

This CSIR research supports the South African Government’s bio-economy strategy for bioplastic materials, which is strongly aligned to the Presidential project on job creation and a green economy. The CSIR is also making efforts to establish a bioplastic research and development centre in South Africa.

“The impact of this work will play an important role in increasing local technical skills and will eventually lead to local job creation in manufacturing. It will contribute to the reduction of environmental pollution by the reduction of greenhouse gas emission during the production of bioplastic bags and better waste management after its disposal, leading to a cleaner environment.” 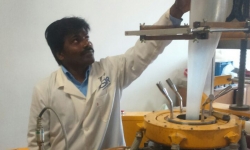