With the lack of a propulsion systems capability in South Africa having been identified as a deficiency in the aerospace industry, and with a clear market for an emerging gas propulsion sector, an ideal opportunity was presented to create a local gas turbine industry. This would enable the continued development of South Africa's considerable capability in guided weapons development.

A 200 N engine is being assembled for testing, while the larger 1 000 N engine is in the detailed design phase with specific sub-systems being manufactured for component testing. The core for both designs is based on mixed flow compressor design, simultaneously enabling high-mass flow and pressure ratios in single stages. The results of the compressors that have been tested to date are encouraging.

Apart from the turbojets currently envisaged, there are many variant designs possible, for instance, by adding turbine stages or converting the engine to bypass engines with higher thrust for helicopter applications and UAVs, respectively.

The work being done on these engines, with assistance from the Aeronautical Industry Support Initiative (AISI) of the Department of Trade and Industry, is key in the creation of a local gas turbine industry that could be of great economic value to the country.

Gas turbines are extremely high value-added sub-systems. The project has the potential to create a high-value export commodity, as well as promote skilled job creation for the South African manufacturing sector.

CSIR and the dti via AISI 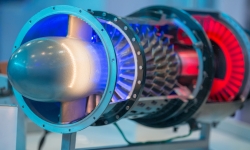 A gas turbine
A gas turbine is a type of internal combustion engine. Its basic operation is similar to that of a steam power plant except that air is used instead of water. Fresh atmospheric air flows through a compressor that brings it to higher pressure. Energy is then added by spraying fuel into the air and igniting it so the combustion generates a high-temperature flow.