The CSIR undertakes work in all of the expert areas mentioned. Computer vision plays a crucial role in specifically robotics. Here, scene reconstruction is commonly used for robot mapping or the 3D reconstruction of infrastructure for inspection purposes. Object recognition and pose estimation is used to detect and recognise objects or people, finding out where they are so that a robot can interact with these appropriately, while video tracking and motion estimation are used to estimate and track how a robot, or objects of interest in a scene, are moving. At the CSIR’s mobile intelligent autonomous systems laboratory, researchers combine algorithms in scene estimation and video tracking in a process called simultaneous localisation and mapping, where an environment is mapped, and a robot is localised within it at the same time.  Researchers designed object recognition algorithms to detect and track people for use in a human-following robot, and pose estimation to recognise human hand gestures so that commands can be given to a robot. Computer vision algorithms are not just of interest in robotics though, and they have been applied to problems in a wide variety of domains, attempting to detect or classify image regions as wet or dry sand to support coastal science researchers, for medical imaging, to recognise fingerprints for biometric applications, and in motion capture systems, which are used in film and biomechanics studies.

Computer vision is the study of methods that seek to understand digital images in an attempt to extract useful information. 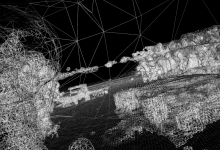