Faster, local COVID-19 test kits could be ready by year-end

The CSIR can make enough enzyme for one billion chemical reactions that can be applied in COVID-19 testing, and researchers hope to begin supplying reagents for a faster, one-step test by the end of the year.

The CSIR can make enough enzyme for one billion chemical reactions that can be applied in COVID-19 testing, and researchers hope to begin supplying reagents for a faster, one-step test by the end of the year.

First, the virus’s genetic material, its RNA, must be converted to DNA using an enzyme called reverse transcriptase, in a reaction called RT-PCR. Second, PCR is then used to make thousands of copies of the DNA, until there are enough of these tiny molecules to detect.

If the test detects the targeted DNA copies, there must have been viral RNA in the sample, hence the test is positive.

The CSIR has already established a highly efficient technology to produce the enzyme needed for the second step, says senior researcher Dr Lusisizwe Kwezi. “This enzyme is known as DNA Taq polymerase, and just three grams of the protein, produced in E. coli bacteria in as little as three days, is enough for a billion PCR reactions.”

This does not equate to COVID-19 tests for a billion people because, among other technical reasons, diagnostic tests must be carefully repeated several times for each patient to ensure accurate results. But it does mean that a huge amount of this important reagent is available locally and affordably.

Another benefit of the reagent mix is that it contains a special antibody that stops the Taq enzyme from working when it is not needed. This makes it more specific when it has to amplify DNA during the PCR reaction, and more robust for potential future point-of-care testing devices.

Kwezi says that earlier this month, the CSIR delivered a 3 g batch to local company CapeBio Technologies (Pty) Ltd, which has licenced and commercialised the technology. It will be rolled out to support the national testing effort as soon as CapeBio gets approval from the South African Health Products Regulation Authority (SAHPRA).

Thanks to funding just awarded through the Strategic Health Innovation Partnership – a partnership between the South African Medical Research Council and the Department of Science and Innovation (DSI) – the CSIR and CapeBio are now working to add the reverse transcriptase enzyme to the mix as well, so that the two-step COVID-19 PCR test can be done in a single step. This will reduce the turn-around time of tests.

The antibody will be produced in plants rather than in E. coli, and Kwezi says the resulting one-step kit could be ready for national roll-out within six months, pending SAHPRA approval.

He says local availability of large amounts of such affordable ‘plug-and-play’ reagents, which also allow for faster results delivered to patients, will be critical in managing the pandemic in the long-term, as we know the virus will be with us for a long time.

Important for all South Africans to note, says Kwezi, is that this key technology in the fight against the worst pandemic the world has seen in a century, began as research years ago to supply the local molecular biology market. ”Back then, little did we know how important this would one day be. This just shows how research and development can translate concepts into technology solutions to emerging challenges whilst producing export products.”

“It is Archimedes who said, ‘give me a lever long enough and a fulcrum on which to place it, and I shall move the world’,” says Kwezi. “We have the potential in South Africa to respond to this pandemic. We have the know-how, and we are grateful for funding from DSI.” 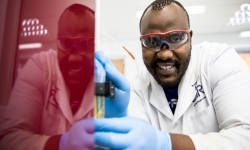