Announcement of new Executive Manager for CSIR Defence and Security 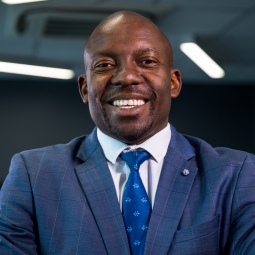 The Council for Scientific and Industrial Research (CSIR) is pleased to announce the appointment of Mr Sipho Mbhokota, as the new Executive Manager for CSIR Defence and Security.

CSIR Defence and Security is a key strategic focus area that seeks to build resilient defence and security capabilities for South Africa to ensure secure borders and the safety of citizens.

Mbhokota joined the CSIR as the Competency Area Manager for the Integrated Systems Group in 2014. His career in the defence and security sector spans over 20 years, with 10 of those years spent as a member of the South African Air Force, where he was a Systems Engineer in the VIP Squadron, as well as a Project Engineer on the RSA Airbus A400M Aircraft Acquisition team. Prior to joining the CSIR, he was the Divisional Manager: Engineering Services at Armscor’s Dockyard, in Simons Town.

The newly appointed executive manager forms part of the team that will be driving the implementation of the organisation’s new strategy. The new CSIR strategy aims to leverage its strong science, engineering and technology capabilities to respond to industrial development opportunities.

“I am excited about the opportunities ahead and honoured to be appointed. I will be working closely with industry partners, public and private sector in developing and localising technologies to support the advancement of industries in the defence and security area. We want to strengthen capabilities in defence, civil security and cybersecurity through advanced technologies,” says Mbhokota.

The CSIR is one of the leading scientific and technology research, development and implementation organisations in Africa. Constituted by an Act of Parliament in 1945 as a science council, the CSIR undertakes directed and multidisciplinary research, technological innovation, as well as industrial and scientific development to improve the quality of life of all South Africans. For more info visit www.csir.co.za